Parenting Together: Yes It’s Worth It

In my pre-mom days, I have been someone who was a bit of a cleanliness freak…the type who would stay up at night and put the house in order.

I think I have come a long way from there…I have learned to kind of enjoy the kiddy mess and don’t mind a bit of ‘disorganization’. Especially since I do realize that kids enjoy clutter. They feel happy having their toys around them.

It gives them a sense of security. And I don’t quite want to bring up a robot, who will always be methodical. I am trying to strike a balance between inculcating mess-clearing habits and also giving her a bit of leeway, and I would say it is surely helping.

She does understand the concept of putting back her stuff, now that she is almost two and does it quite often with my help. But there are times when she won’t, and that’s okay with me.

Here are some of the things, which really helped me smoothly teach her the concept of clearing-up.

1. First and foremost – Be a Good Role Model

The best way to teach is by setting a good example. When we keep our stuff back neatly and keep our surrounding clean, they learn eventually.

It’s a good idea to start demonstrating the concept of clearing-up even when they are really small. That could be as young as 3 months. The clutter is much lesser then. But show them that things go back to where they belong. Don’t overdo it please; you don’t want kids with an OCD!

3. Try and Restrict the Clutter to a Small Area

Don’t let them throw toys all over the house. Try to keep to it a small room or demarcate a play area. It’s always easier to teach them how to clear a small area.

Sing or dance around while cleaning up. Don’t make it an angry process. You could sing the ‘Cleanup Song’ or play it off your computer. Make it a fun activity.

Here is a link to a ‘Clean-up Song’ 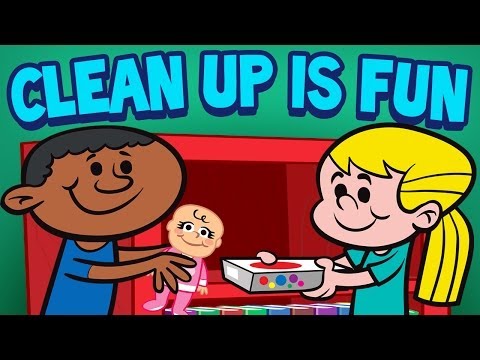 5. Help Them; Don’t Expect Them to Do it on Their Own

As long as they are helping you put back things, they are getting the concept. It’s unrealistic to do expect them to do it on their own. The tougher tasks can be handled by you while they do the easier ones.

6. Don’t Let the Mess Build up Through The Day

Every time they finish a play session, make them clean up. Like, before lunch or before naptime. They may not want to do it all the time. But keep encouraging them, do not force them or lose your temper.

Even we do not like it when we are suddenly told to do something not fun for us. Similarly, they will resent it too if you do not give advance notice. Let them know, ‘In 10 minutes, it will be cleanup time’.

Don’t let the rules be too harsh. Give them the extra 5 minutes at times. They may want to put the books in the cupboard instead of the bookshelves. You should allow these flexibilities.

9. Most Importantly, Keep Your Cool

Teaching them anything when you are angry will ensure that they do just the opposite. So don’t get heated up when they don’t listen. Don’t expect miracles. They are not going to start clearing up overnight.

They will take time to understand. Keep at it, they definitely learn eventually.

Child Abuse: A Better Understanding and Ways to Get Help

Parents Are Over-Stressed and Over-Worried. Here’s How to Keep Your Cool

What is a Baby Monitor? Advantages and Disadvantages

The Importance of Children’s Vitamins

Contraceptive Pills and Their Side Effects